Makery traveled to Hallein (Austria), where the annual Schmiede festival took place from September 16 to 25. The festival was conceived as a temporary makercamp and has been held for the past 15 years in the huge buildings of the city’s former salt factory. Panorama of the first week.

Schmiede (the forge), has for many years welcomed its Smiths on the formidable site of the saltworks on the island of Pernerinsel (white gold) in the heart of Hallein near Salzburg. Built between 1854 and 1862, the salt factory with its large wooden halls remained in operation until the 1980s. In the year 2020, despite the health situation, the organizers of Schmiede were determined that the not-to-be-missed gathering of Salzburg’s maker-artists – so celebrated for its studious yet festive atmosphere – could take place. This year, only about 100 Smiths could be welcomed in the site’s huge halls, compared to 200 in previous years (read our reportage on the 2019 edition). Masks were mandatory when not sitting, no collective kitchen, no parties, no DJs, no smoke machine, but creativity was still there, with workshops, conferences, performances.

Rüdiger Wassibauer, director of Schmiede, welcomes the Smiths participating in the festival. This year, no public visits are allowed during the festival because of Covid, but the work done will be exhibited and the workshops will be open on the last day for the “Werkschau”.

Peter Hutter is an artist, videographer, graphic designer and musician. He was awarded for his animated film Tekno Kabaret in 2011. Since then, with the Konverter Collective, he creates transdisciplinary media installations. In Schmiede, he is finalizing his mobile synthesizer setup. “Today with this pandemic, it’s better to be mobile quickly”.

Stephan Tiefengraber, sound artist and programmer of the sound art gallery / concert hall Tresor Linz, prepares his performance in the former factory transformer. When we went to see him, the hall was resonating electromagnetic frequencies picked up by Stephan directly from the equipment.

Liepa Kuraite, hacker, musician under the alias bohalt and member of the feminist post-hardcore band Petrol Girls, is preparing a live with Peter Hutter.

Bernhard Hollinger, is a musician, visual artist and curator, based in Berlin. He has just spent a few weeks in Feral Labs residence in Schmiede. Creator of the platform Lo-Fi Playground dedicated to lo-fi artists, Bernard collaborates with several artists at Schmiede by making his knowledge and sound equipment available to them.

Max Volschlager, developer, hacker and musician, has started the reverse engineering of an electronic organ. He regularly codes for multimedia installations, websites, apps and all kinds of hacks. He is also the one who developed with Chris Schratt, the site and mobile app “WeAllWall” dedicated to the Smiths for the duration of the festival.

Chris Schratt is a freelance designer and video artist based in Vienna. A veteran of Schmiede, he hasn’t missed a festival for 13 years. This year, he installs his “Plotbot”, an electric train circuit with 2 cameras and an interactive lighting system. “My passion is to tell stories through film and music. I really enjoy making video productions – from the concept, through the lights, sound design, music and editing all the way to the final clip”.

Georg Schütz, “mediaguy since the last century”, is an artist and video director. Since 2005 he has been creating films, installations and video shows in addition to his professional activity as a director. Georg was inspired by the theme “Horses” of the festival, but decided to go further by preparing a video performance in which “we will also see unicorns and other animals”.

A different kind of masks…

Felicitas Grabner, is a freelance graphic designer and illustrator based in Vienna. She installs her wood and paper structure which will be used as a set for photos and projections.

Chill-out in front of the caravan during a Bernhard Hollinger concert.

Jakob Barth, video director and Susanna Vogel, PhD student at the Center for Human-Computer Interaction at the University of Salzburg, have set up a photo studio. All the Smiths have their portraits taken, the photos are displayed in the entrance hall, and integrated into the dedicated mobile app. Very handy to put a name on a face.

Lisa Magnan, French dancer-performer based in Lyon, and Sarah Krainer, designer based in Vienna, are preparing for a performance. 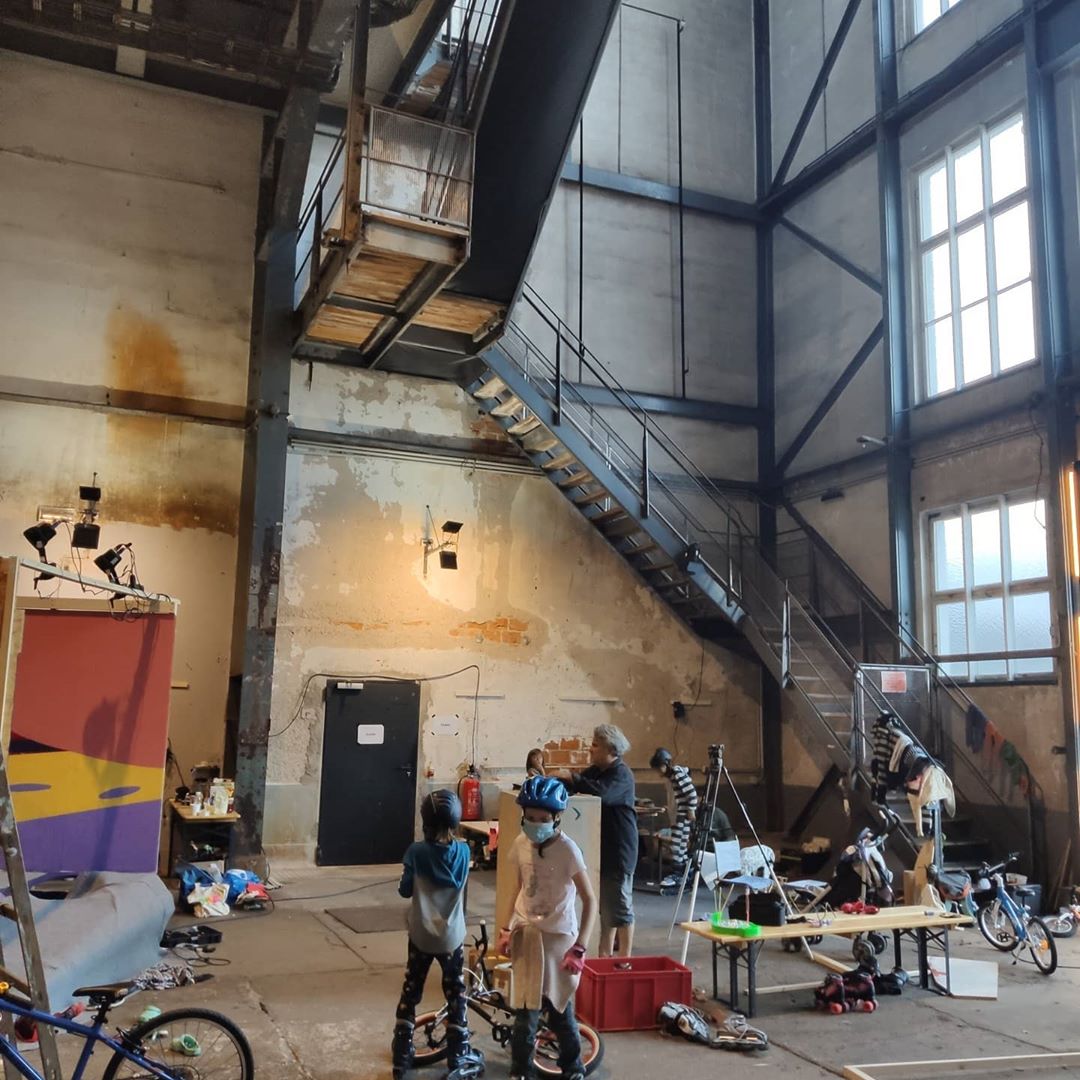 A team is building a play structure for the children. The floor of the structure is a kind of bouncing mattress, a part of the walls is covered with a green background.

Break on the esplanade of Schmiede for students from the neighboring city of Salzburg, who came to participate in the screen printing and engraving workshop.

Lisa Horvath, is a scenographer and costume designer based in Graz. Her set and costume designs for contemporary theater since 2009, for example with the Spielraum Ensemble, have made her recognized today as one of the most talented contemporary set designers. At Schmiede, she is building and testing inflatables for a future show. “My set designs are never just a backdrop, they are part of the show, they are microcosms or machinery that co-create the dynamics of the play. Through the stage and the costumes, I try to create a world of its own, a parallel reality, which – as in a dream – you don’t question.”

Fara Peluso, bio-artist based in Berlin, in Feral Labs residence in recent weeks in Schmiede, is testing an iteration of her bio-plastic, while Bernhard Hollinger is recording the sound of the gently warming preparation.

Verena Frauenlob, sculptor and tattoo artist, prepares her clay. She has decided to produce several sculptures in Schmiede, at the moment she is going to make some casts of the faces of the volunteer Smiths.

The salt storage room is sometimes used as a stage space on which one can project, or even perform.

Schmiede is part of the Feral Labs Network, co-funded by the European Union’s Creative Europe program.